Iranians support the Israeli people against the Ayatollahs.

In 1948, Israel and Iran [under Shah] had maintained close diplomatic, cultural, and economic ties as the newly established nation owed about a billion dollars to Iran for business conducted before the Islamic Revolution. Iran Israel Relations

The tumultuous relations between Iran and Israel has been extremely complex. Since Israel was officially declared an independent state during the time of PM David Ben-Gurion, the two nations have gradually reached the pinnacle of partnership and cooperation in all fields of political, military, trade, industrial, and even academic cooperation, and it was thought that in the Middle East, no amity like Israel and Iran exists.

The relations between the two nations of Iran have a much longer history than these seventy years and reach 2500 years ago — as the Persian kings are credited with permitting and enabling the Jews to return to Jerusalem and rebuild their Temple.

“In the 20th century, the Pahlavi dynasty (1925 to 1979) implemented modernizing reforms, which significantly improved the life of Jews. The Shi’a clergy’s influence was weakened, and the restrictions on Jews and other religious minorities were abolished.

‘Reza Shah The Great’ prohibited the mass conversion of Jews and eliminated the Shi’ite concept of ritual uncleanness of non-Muslims.”

Despite the good diplomatic relations between Iran and Germany at that time, ‘Reza Shah The Great,’ the king of Iran, refused Hitler’s request regarding announcing the Iranian Jews as an inferior race and second-class citizens. The Iranian diplomat Abdol Hossein Sardari, who is given the title Shindler of Iran, saved Jews in Europe from the Nazis during the wartime. Thousands of Iranian Jews and their descendants owe their lives to the Iranian Shindler.

After the Islamic revolutionaries took power in 1979, Israel, which had relatively warm relations with the Shah, became a serious issue in Tehran.

Revolutionaries [included leftists and MEK] decided and urged the temporary government to cut off all official relations with Israel, and sanction initiatives adopted a sharp anti-Zionist stance.

The Islamic authorities cut off all official relations, ceased to accept Israeli passports, and the holders of Iranian passports were forbidden from traveling to Israel. Further, the Israeli Embassy in Tehran was seized, and handed over to the terrorist Palestinian groups.

After the Shiite clergy came to power, the animosity between the two countries sparked, and the revolutionaries singled out the two main enemies by calling the U.S. the “Great Satan” — and its main ally, Israel, the “Little Satan”.

The senior officials in Iran, including the Supreme Leader and former president Mahmoud Ahmadinejad, has aimed to wipe Israel off the map. The Islamic Republic of Iran (IRI) has founded and funded proxies throughout the Middle East to attack Israel.

The U.S. and Israeli flags are burned in Iran amid IRI’s anger over prolonged animosity with the two nations.
IRI has carried out ‘wide-scale’ war games in Iran and Iranian sea waters, launched missiles had anti-Israel, anti-American and anti-Saudi slogans written on them. The missiles shown on state-run media bore the slogans “Death to America, Death to Israel, Death to Al Saud.” Some rockets also bore in Arabic the phrase “kill the friends of Satan.”

The Islamic regime in Iran also decided to keep a plan to impose a formal ban on Iranian athletes competing against Israelis.

Iranians, however, have rejected their tyrants’ hostile actions in the past 4 decades and refused to burn or trample on the Israeli flag.

On June 2018, Iranians ran #WeStandWithIsrael at the same as Iran’s regime celebrates the last Friday of Ramadan, calling Al-Quds Day by itself, to show its hatred towards Israel.

Iranians run #WeStandWithIsrael at the same day as Iran’s regime celebrates the last Friday of Ramadan, calling Al-Quds Day by itself, to show its hatred towards Israel. The brave and peaceful citizens deny to participate the organized anti-semite rally. Good Job ? pic.twitter.com/3nY7elHcQG

There are many spontaneous campaigns by Iranians in support of the Israeli people against the Ayatollahs.

“Iran’s athletes and sportsmen are forced not to compete with Israelis, it is not because they choose to.”
Recently, prominent Iranian journalist Potkin Azarmehr posted an image online showing the Iranian sportsman carries a banner written in English and Farsi: I am an athlete, and I accept Israel as a country.”

Iran’s athletes and sportsmen are forced not to compete with Israelis, it is not because they choose to pic.twitter.com/AjqcFAD82n 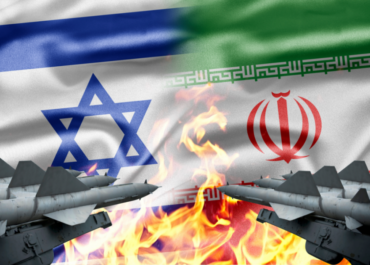 Iran-Israel Relations Back To More Than 2,500 Years