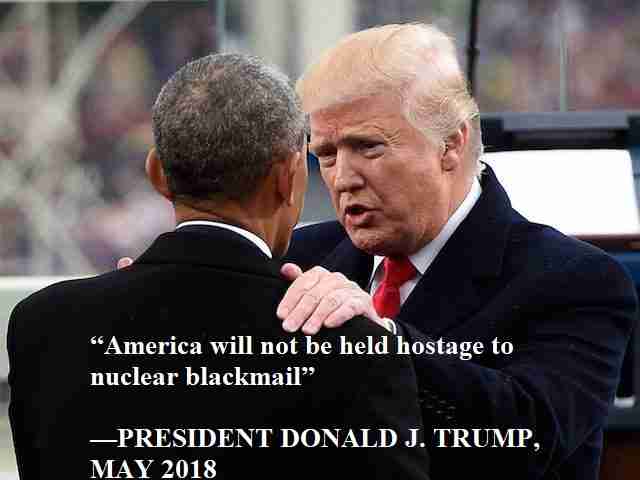 In a Tweet piece, Morgan Ortagus wrote that Iran has continued its longstanding practice of arming and training terrorists and militia groups throughout the Middle East, inflaming conflicts in Iraq, Syria, and Yemen.

Iran has continued its longstanding practice of arming and training terrorists and militia groups throughout the Middle East, inflaming conflicts in Iraq, Syria, and Yemen. https://t.co/lqSKr0uBYM pic.twitter.com/Wc1rD0iMDT

“In response to the Islamic Republic of Iran’s choice to pursue hostility and aggressive acts against the U.S. allies, President Donald Trump administration has implemented the unprecedented Maximum Pressure Campaign,” the U.S. State Department announced in its Iran’s Chronicle.

“We have made good on our commitments by imposing the toughest sanctions regime ever against the corrupt leadership of the Islamic Republic. Our sanctions have denied Iran more than 90% of its oil export revenue, depriving the regime access to well over $70 billion in income that could have otherwise gone to fund terror operations – while preserving avenues for humanitarian trade and assistance. These actions have saved the lives of innumerable Iranians, Syrians, Iraqis, Yemenis, and other innocent civilians in the regime’s crosshairs.”

Addressing the regime’s repeated acts of aggression beyond its borders as a campaign of terror, the State Department reminded the repression at home: “In response to nationwide 2019 Iran Protests the regime executed a brutal crackdown, killing as many as 1,500 of its own citizens while jailing thousands more. In an attempt to hide its actions from the world, the regime simultaneously imposed a near-total shutdown of access to the internet.”

“Since our last report, several countries in Europe and South America have correctly declared Iran’s proxy Hizballah a terrorist organization. We invoked the “snapback” mechanism to restore nearly all UN sanctions on Iran. We continue to stand with the Iranian people, and have rolled out sanctions and visa restrictions on a host of Iranian officials directly responsible for the lethal crackdown in November 2019. Corrupt and repressive regime officials, not the Iranian people, are the targets of the Maximum Pressure Campaign.”