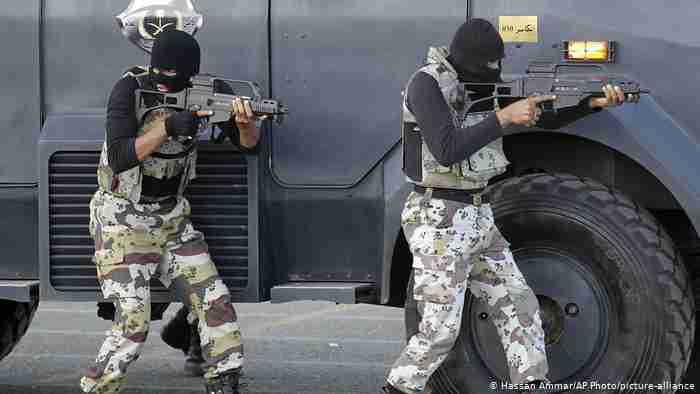 ICBPS Morning Brief– Saudi Arabia says it has busted an Iran-trained terror cell whose members got military and field training inside IRGC sites.

On Monday, the kingdom of Saudi Arabia announced that it has dismantled an Iran-trained terror cell, arresting ten members and confiscating some weapons and explosives in the process.

“Three of the terrorists arrested were trained in IRGC bases in Iran, and the rest were “linked to the cell in various roles,” according to Saudi-state media.

The arrests were made last week after a probe uncovered the suspects’ identities and two hideouts: a house and a farm, according to a statement made by the Presidency of State Security, a Saudi intelligence body.

The spokesperson for the Presidency of State Security said that a total of ten members of the cell were arrested. The cell was formed between October and December 2017, he added.

ICBPS MORNING BRIEF: Iran IRGC To Hit On All Involved In U.S. Killing Of Terrorist Gen

Last week, says the State Department Spokesperson Morgan Ortagus said that Iran-back proxies have been funded billions of dollars in the past years. Iran has actually sent more than $16 billion to its terror proxies and partners since 2012, expressed the Spokeswoman.

“At the UN’s 75th General Assembly, the IRI president Hassan Rouhani has claimed that its regime supports peace and combats extremism.”

In a Thread on her Twitter account, Morgan Ortagus wrote that money should’ve gone back to the Iranian people they stole it from.

At #UN75, @HassanRouhani claimed that Iran supports peace & combats extremism- if only that were true. The Iranian regime has actually sent more than $16 billion to its terror proxies & partners since 2012. That money should've gone back to the Iranian people they stole it from.

“If the “era of dominance and hegemony” that Rouhani speaks of is over, why doesn’t Iran get its troops and proxies out of Iraq, and stop trying to dominate Lebanon through Hezbollah?”

Further, the U.S. Secretary of State Mike Pompeo says the Maximum Pressure Campaign has been cutting multi-billions Iran’s revenue that could have otherwise gone to terror.

“Our sanctions have saved countless Muslim, Jewish, and Christian lives by denying Tehran access to billions of cash which the failed JCPOA gifted the regime and paved the way for Iran to become the arms dealer of choice for terrorist groups and dictators all across the world in just five short years.”