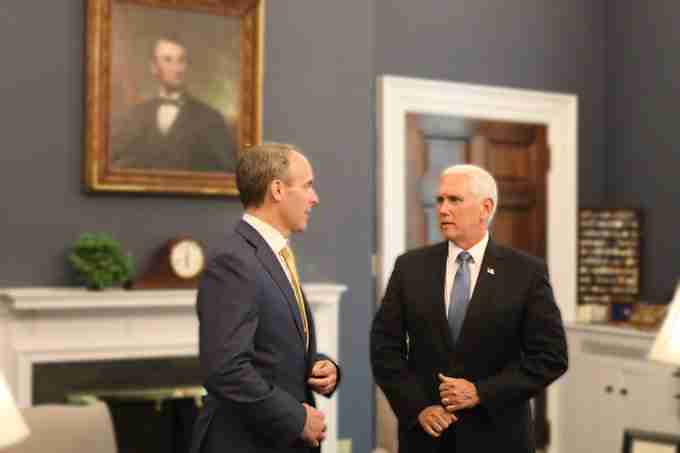 During a meeting with the U.S. Vice President Mike Pence, Raab announced that Iran must never be allowed to obtain a nuclear weapon.

Raab posted a tweet saying he and Mike Pence discussed the “latest on progress in Middle East peace, our commitment to Hong Kong, the need to prevent Iran’s pursuit of a nuclear weapon and support for COVID-19 vaccine development,” following the meeting at the White House.

Great to see @VP @WhiteHouse to discuss latest on progress in Middle East peace, our commitment to Hong Kong, the need to prevent Iran’s pursuit of a nuclear weapon and support for Covid19 vaccine development. pic.twitter.com/xvfZaYSoVS

“We also discussed Iran. And, we also share the view that the diplomatic door is open to Iran to negotiate a peaceful way forward. That decision is there for the leadership in Tehran to take,” according to the Foreign Secretary statement in Washington DC.

“On the Middle East Peace Process, we discussed the normalisation between Israel and the various Arab States,” added Raab.

The U.K., Germany and France, however, called on Iran to fully fulfil its nuclear obligations and maintain the JCPOA, but Raab’s comment in the statement clarified that Iran is not in a situation like Obama’s era.

Russia and China, however, help Tehran to gain its atomic ambitions but the United States and its allies try to curb Iran Nuclear Weapon Ambitions.

Now, there is a consensus between Britain and the United States on Iran Nuclear Weapon Ambitions.