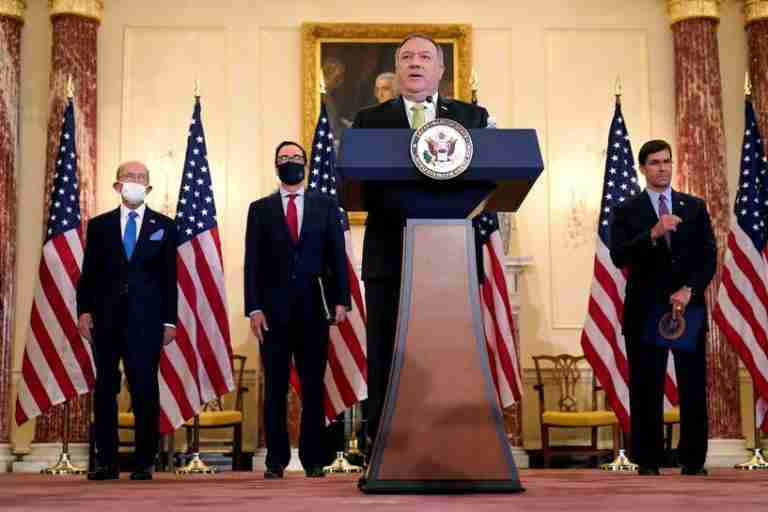 ICBPS Morning Brief– The United States has implicitly warned European leaders and 15-member U.N. Security Council that there will be ‘hell to pay’ if they do not take a responsibility to enforce sanctions on Iran.

During a press conference on Monday, Secretary of State Mike Pompeo, flanked by Defense Secretary Mark Esper, Treasury Secretary Steven Mnuchin, and Commerce Secretary Wilbur Ross, expressed that “no matter who you are, if you violate the U.N. arms embargo on Iran, you risk sanctions.”

“Our actions today are a warning that should be heard worldwide,” Pompeo added.

“We have made it very clear that every member state in the United Nations has a responsibility to enforce the sanctions,” Mike Pompeo told reporters when asked about EU-Russia-China opposition.

On Monday, President Donald Trump administration announced a slew of fresh sanctions and additional measures in support of the White House ‘Maximum Pressures’ campaign against Tehran.

Washington on Saturday reimposed U.N. Sanctions on Iran through a snapback process, which other Security Council members have already claimed the U.S. has no authority to execute.

No mainstream media, however, has tried to review all aspects of the prolonged disputed issue, but Richard Goldberg, the American political advisor to the U.S. National Security Advisor in the Donald Trump administration, has rejected all sympathizing speech and clarified that the White House has the right to trigger ‘snapback’ because it is part of a binding ‘Security Council Resolution,’ not the Joint Comprehensive Plan of Action (JCPOA).

Further, the United States has slapped new sanctions on Venezuela’s Nicolas Maduro for his role in aiding Tehran’s weapon programs.

Previously, during a meeting of the IAEA Board of Governors held in Vienna, Austria’s capital on September 16, the Deputy Foreign Minister for International and Legal Affairs, Mohsen Baharvand said Iran cannot be expected to comply with all of the Joint Comprehensive Plan of Action (JCPOA) obligations without benefiting from it.