Skip to content
Home
/
Ukraine and Russia: What You Need To Know Right Now

Ukraine and Russia: What You Need To Know Right Now

March 7 (Reuters) – Moscow announced new “humanitarian corridors” to transport Ukrainians trapped under its bombardment – to Russia and its ally Belarus, a move Kyiv dismissed as an immoral stunt and pleaded for more sanctions. L2N2VA07O

Russia’s defence ministry said it would open six humanitarian corridors in Kyiv and other Ukrainian cities, but Kyiv rejected the plan given the proposed evacuation routes led into Russian or Belarusian territory. read more

A third round of talks about ending hostilities is due in Belarus on Monday, while Russia’s and Ukraine’s top diplomats are expected to meet in Turkey on March 10.

Oil prices hit 14-year highs after Washington said it was talking to European allies about banning imports of Russian oil.

As many as five million Ukrainians could flee the country if Russia’s invasion continues, the EU’s top diplomat said, while United Nations’ refugee agency said over 1.7 million have left so far. British Prime Minister Boris Johnson rejected calls for easing visa requirements for Ukrainian refugees, saying Britain was “generous” but needed checks on those arriving.

*’No war’ protests in Russia

Police detained 5,020 people at Russia-wide protests against the invasion of Ukraine, according to an independent monitoring group.

“In Ukraine rivers of blood and tears are flowing. This is not only a military operation but a war which is leading to death, destruction and misery,” said Pope Francis, rejecting Moscow’s term “military operation.” read more 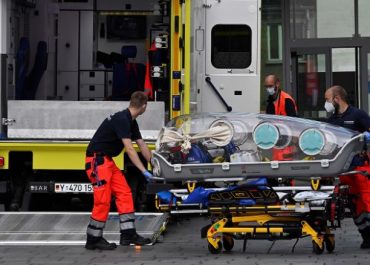