United States Lashes Out EU For Siding With Ayatollahs

ICBPS– The former director of intelligence for the United States Richard Grenell has authored a stinging indictment of the German government for its failure to vote in favor of a prolonged extended weapons embargo against the Islamic Republic of Iran (IRI).

Germany’s decision not to prevent Iran — a lethal foe of the United States, Israel along with the West — from importing Chinese and Russian weapons systems is so consequential for Hezbollah’s resourcing capacities that it effectively neutralizes the positive step Berlin had taken by revising its Hezbollah policy, according to Grenell.

Writing in his The Hill column, Grenell, a former Ambassador to Germany, declared “this was a particularly troubling decision by Germany, which recently took the bold step of circumventing EU policy by designating the entirety of Hezbollah as a terrorist organization.

Germany also regularly reaffirms its special commitment to Israel’s security, the country most threatened by the IRI’s arms.

He included that “Germany’s choice not to avoid the IRI from importing Russian and Chinese weapons systems are so substantial for Hezbollah’s resourcing capabilities that it efficiently thwarts the effects of the favorable act Berlin had already taken by revising its Hezbollah policy.”

Germany prohibited all Hezbollah activities within the territory of the Federal Republic in April.

“The factor for Germany’s vote, along with France and the United Kingdom, to stay away last week at the United Nations Security Council, was because of its objective to maintain the questionable 2015 Iran nuclear treaty, also known as the Joint Comprehensive Plan of Action (JCPOA),” stated Grenell.

Further, the U.S. Secretary of State Mike Pompeo has accused Washington’s European allies of “siding with the ayatollahs” after they said the United States could not reimpose sanctions on IRI.

“Our message is very, very simple,“ Pompeo told reporters at the U.N. and added that “The United States will never allow the world’s largest state sponsor of terrorism to freely buy and sell planes, tanks and missiles and other kinds of conventional weapons. These U.N. sanctions will continue the arms embargo.“

The United Nations on Thursday that the United States is initiating a “snapback” of all international sanctions on Iran dating back to 2006, declared the secretary of state.

In a biased press release, the Persian BBC — is well known for its full support of Ayatollahs — quoting the UK, France, and Germany said the U.S. did not have the legal right to trigger “snapback” sanctions because it pulled out of the Iran nuclear deal in 2018.

Richard Goldberg, the American political advisor to the U.S. National Security Advisor in the Donald Trump administration, however, rejected the sympathizing speech and clarified that the White House has the right to trigger snapback because it is prat of a binding Security Council Resolution, not the treaty.

The United States withdrew from the JCPOA in 2018 because the unsigned treaty did not advance American national security interests to stop IRI’s terrorism and its nuclear weapons ambitions, according to the Trump administration.

Yesterday, the Islamic Republic of Iran’s IRGC displayed locally made ballistic and cruise missiles — celebrated its National Defense Industry revealing a new 870-mile range missile, which was named for killed-terrorist Hajj Qassem, and a naval cruise missile with a 620-mile range was named the terrorist-killed Abu Mahdi, who had close ties with Tehran’s Ayatollahs. This is why the Trump administration designated IRGC — which shot down the Ukrainian Airlines flight with two missiles on January 8, 2020, and killed all 176 passengers and crew members on board — as a foreign terrorist organization.

Make no mistake: the @UN Security Council failed to hold Iran accountable, enabled the world's top state sponsor of terrorism to buy and sell deadly weapons, and ignored the demands of countries in the Middle East. In New York today, America will correct these errors. pic.twitter.com/bL1xyrTVKp

Previously, German President Frank-Walter Steinmeier praised the Islamic Republic of Iran in the name of the German people in 2019 in connection with the Islamic revolution.

Merkel’s administration likewise sends out government authorities to economic workshops to sidestep the United States sanctions against the mullah’s kleptocracy.

Israel supports the extension of the UN arms embargo against the IRI. Merkel informed the Knesset in 2008 that the security of the Jewish state is “non-negotiable” for her federal government. 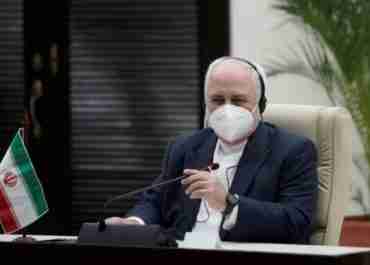 U.S. Cool To, But Does Not Reject, Iran's Idea On Reviving Nuclear Deal