Although the revolution’s murderous leader had stated that the IRGC should not be involved in financial affairs, the nefarious organization started grabbing everything of economic value there was to take in Iran.

The IRGC started by monopolizing construction projects, which ultimately led them, directly or through ties to regime officials, to be involved in all of Iran’s economic aspects and resources. It manipulates all the regime’s policies to its own ends.

The IRGC runs a mafia-like cartel of industries, including oil companies, dam and road construction contractors, electronics, aviation, and building construction industries. Their financial power also allows the Guards to expand their political and operational capabilities around the world.

The Revolutionary Guards have also engaged in criminal activities to suppress Iranians by arrest, jail, and torture of dissidents, minorities, and even foreigners and dual citizens.

The IRGC targets foreigners for imprisonment, to put pressure on the international community to comply with the regime’s blackmail demands. Dozens of foreigners and dual national citizens are being jailed for years, to be exchanged in thinly-veiled hostage deals, such as the one in which the Obama administration paid the regime a rich ransom to free some United States citizens.

Hypocritically, the Guards import into the country illicit drugs and alcohol and exports arms out for their revolutionary ideology. They widely arm militant groups in the region, such as Hezb’allah on the border against Israel. The IRGC also has a hand in drug trafficking to the rest of the world, using its underground customs control to export heroin to the West from Afghanistan. Reportedly, it is also widely involved in money laundering.

With all that, the Trump administration seems to have finally had enough of the regime’s terror games. It recently announced the decision to list the IRGC as a terrorist entity.

In response, a few minutes after the announcement was made by White House officials, the Iranian regime’s Supreme National Security Council decided to designate the U.S. Central Command (CENTCOM) and its related forces as a terrorist organization.  Further, the Islamic parliament in Iran passed a “double-emergency retaliation bill” against the U.S. designation, as declared Heshmatollah Falahatpisheh, the IRGC-affiliated chairman of the Committee on Foreign Policy and National Security of the Islamic Consultative Assembly.

“American troops in the Middle East will no longer be in peace if US labels IRGC as a terrorist group,” Major General Mohammad Ali Jafari, the IRGC commander-in-chief threatened. “The U.S. military would lose the security it enjoys in the region if Washington carried through with the designation,” RFERL quoted the general as saying.

Like the IRGC commander, Iran’s Foreign Minister Mohammad Javad Zarif also hinted at violence against American military forces, if in somewhat more veiled words, but clearly warning that the United States would face a ‘quagmire” if the IRGC was placed on the terrorist list. While that clever minister’s words tend to be less antagonistic, it is important to understand that there is no difference between such power sects within the Iran regime — both “reformists” and “conservatives” are united in their common goal against peace and security for America and Israel.

So, a consistent application of pressure on the regime seems to be a productive strategy. President Trump’s designation of the IRGC as a Foreign Terrorist Organization is the most recent in a string of such actions against the mullahs, ever since he tore up the disastrous Iran Nuclear Deal.

The IRGC and its Quds Force are the main threats in the region (or the world) after ISIS, which has now been largely put down. Next, all those who support this terrorist organization should be tried in court and expelled from western countries. The assets of the IRGC and its affiliates should be seized, and then perhaps escrowed for return to the Iranian people, after the regime falls, as an incentive.

The EU and the American Left will surely try to resist Trump’s moves. And there are other terror groups waiting for an opening they can step into if the regime weakens. But Trump’s pincer movements would overwhelm the regime’s defenses. And if he keeps the Iranian people on his side, as he has been doing, they can gain for themselves the freedom and prosperity they have been missing all these decades. 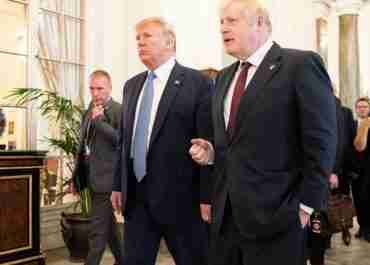